In this article, we will be taking a look at how to make homemade ferret toys for your pet to play with. The vast majority of these toys can be made from common household items, many of which you probably have laying around your house right now.

There’s no need to splash out on expensive toys when you can make these at home. The best part is that you can get as elaborate as you want with these toys, make them as intricate as possible to keep your ferret interested for longer.

Click Here To Check For The Best Price On Ferret Food!

How To Make Homemade Ferret Toys

If you are looking for some homemade ferret play area ideas then our post on making the ultimate ferret playground may be able to help you with ideas for the playpen. Without further ado, let’s get started with our list of the best homemade ferret toys and accessories.

Ferrets love to play in old sheets, if you can flick it up in the air a few times to create an air gap it’s even better. Almost every household has an old sheet that they can set aside as a homemade ferret play toy. On the off chance you don’t, sheets can be picked up very cheap online. The video below shows how much ferrets can enjoy playing in an old sheet.

Similar to the old bed sheets trick, ferrets also enjoy playing in a an old pillowcase. The pillowcase can be empty or still have an old pillow in it, ferrets don’t really seem to care. Again, if you don’t have any old pillowcases around the house, you can pick them up online cheap. Empty pillowcases are also small enough to be placed into your pet ferrets cage as a toy if needed. The photo below shows 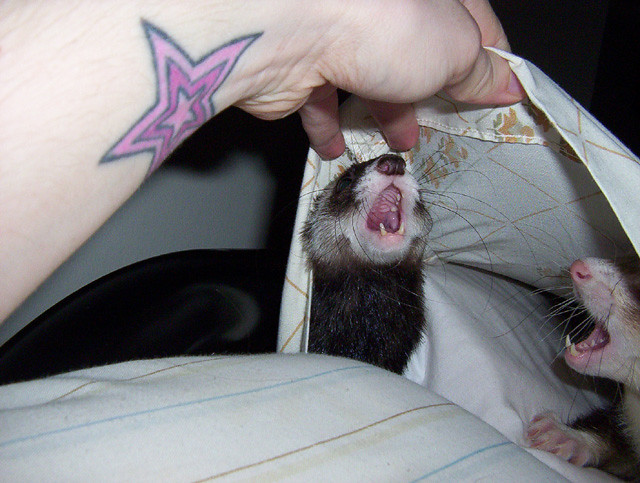 An often overlook potential homemade ferret toy is a simple shoe box. Leave the crinkle paper inside so as the ferret plays the box makes a sound. It seems to help entertain the ferret and keep it occupied in the box for longer. The video below shows a good example of a ferret playing in a shoe box.

Depending on your profession or if you have had any home repairs done recently you may have some tunneling laying around the house. Ferrets absolutely love playing in tunneling, especially if you hide a few ferret treats in the tunnel beforehand. The image below shows a pet ferret playing in some tunneling.

Another quick, easy, and simple DIY ferret toy can be made from empty cardboard boxes. Simply cut a few holes in different sides of the box and then seal the top of it off to make it darker. You can add as many boxes as possible and your ferrets will love climbing in and out of them.

If you do have multiple boxes to turn into ferret toys then you can tape them all together to make one long cardboard box tunnel. Cut holes in the sides of each of them so that your ferrets can climb all the way through. Rather than just cutting a hole in the same location all the way through the box, try to mix it up.

For example, one on the lower left of the boxes, then the next one on the lower right, then in the lower middle. This will help keep your ferret guessing as it works its way through the tunnel. The image below shows a good example of how you are able to make an interesting toy out of empty cardboard boxes for your ferret.

Ferret mazes are another popular homemade toy. They usually take some time and effort to set up as well as a small budget but a lot of the items may already be laying around in your home. Although not specifically for ferrets, our post on building a hedgehog maze may help you.

Homemade Toys For A Ferrets Cage

There are also a number of different DIY ferret cage accessories that you can make from stuff that is common around the house. These tend to be much smaller than the ideas above as they are meant to fit into your pet ferrets cage to offer enrichment to their environment.

The inner cardboard roll of a used toilet roll can be used as a quick and easy toy for your ferret. That said, your ferret can easily get stuck within the roll as shown in the video below. Due to this, we recommend that you only let your ferrets play with toilet roll tubes when they are supervised.

Although this one tends to be hit and miss depending on your ferret, an old shoe can be used as a toy. Some ferrets won’t show the slightest interest in the shoe but others will play with it and investigate it. Apparently, they find the smell interesting and the fabric of the shoe is fun to bite.

Another quick and easy toy that should also be supervised during use is a plastic bag. Similar to the strategy of using an old shoe box as a toy above, the sound of the plastic bag as the ferret plays seems to keep them hooked.

To add that extra dimension to the bag try cutting holes in it in random locations. This will allow the ferret to squeeze its way through the different holds and enjoy itself.

An Old Set Of Pants

Depending on the size of your ferret’s cage, an old set of pants may take up too much space. An easy way to counter this problem is to either cut one of the legs off the pants or cut them down to shorts to reduce space. If you do choose to cut them into shorts, the removed material can be used as additional toys. The image below shows a ferret relaxing in an old set of jeans. 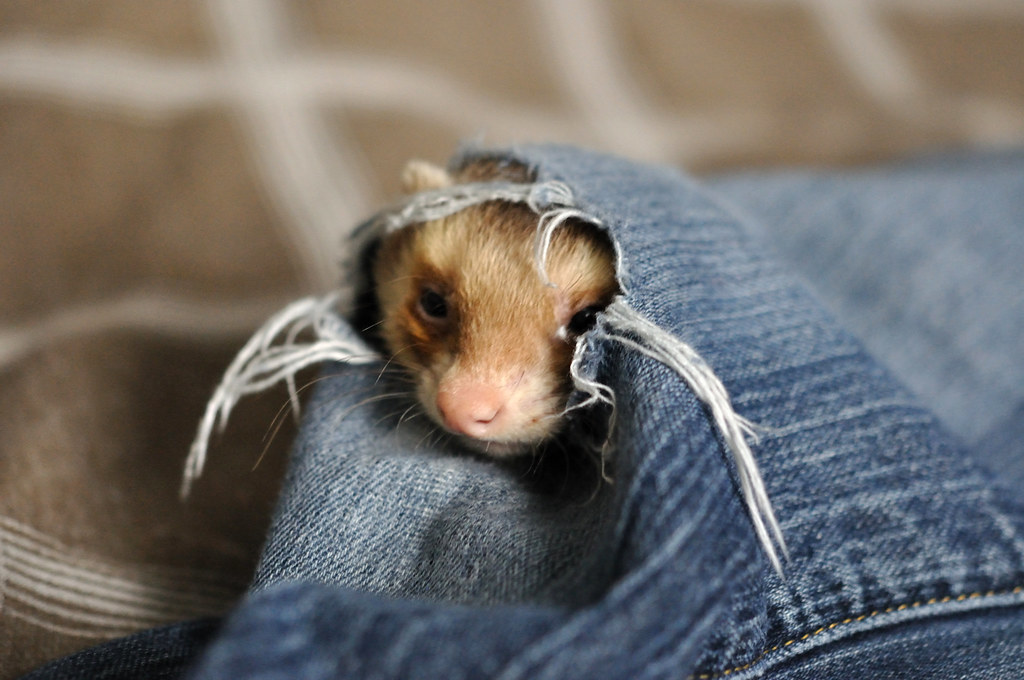 How To Make A DIY Ferret Dig Box

Making your own DIY ferret dig box is an excellent idea, they are easy to make and ferrets love them. That said, ferrets should be supervised while playing in these boxes in case they decide to try and eat the materials you put inside of them.

One of the most popular and most common DIY dig boxes is to simply keep a delivery box of an item you have ordered that comes with packing peanuts. Then open the box and let your ferrets play as they do in the video below. You can order additional packing peanuts online if you require more.

Rice is one of the most common foods on earth. The vast majority of households usually have rice available but buying it in bulk usually works out cheaper. Simply fill a cardboard box with the rice you have and then let your ferret play in it as shown in the video below.

There are a number of uses for your new homemade ferret toys. Our posts linked below may help you come up with ideas on how to best uses them with your ferret.

Click Here To Read More Of Our Articles About Ferrets!